As our loyal followers know already, the restoration workshop has been hard at work behind the scenes while the museum is closed. Several exceptional works by Peter Paul Rubens are among those restored in recent years. They illustrate the diversity of the KMSKA’s collection and Rubens’ mastery of several different disciplines.

1. Holy Family with the Parrot 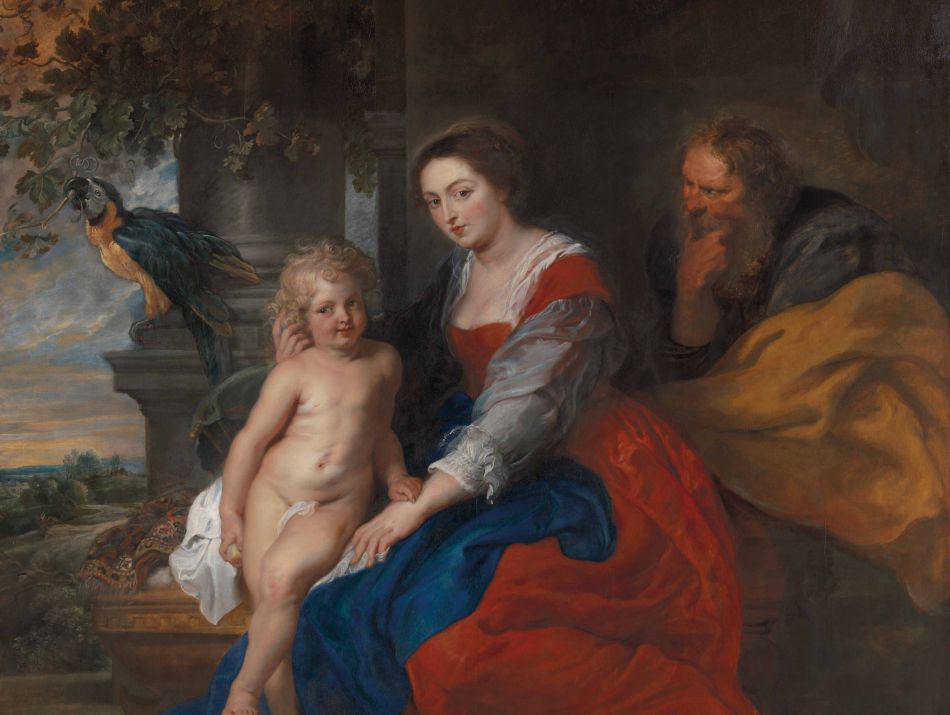 A moment’s rest, Mary is thinking as she tenderly ruffles Jesus’ hair. She gazes at us alertly. To judge by the mischievous expression on Jesus’ face, the quiet moment isn’t going to last long. Mother and child are the key elements in this painting. Even more so when you realize that it was only some 20 years later that Rubens expanded the work to include Joseph, a parrot – popular at the time – and a summer landscape. He donated the work to the Guild of St Luke in 1633. Maybe he wanted to present his professional association with a larger work than one showing Mary and Jesus alone. Either way, fashions had changed in the meantime. Rubens gave Mary a trendier dress and a new coiffure, with her hair worn up rather than down. What’s more, a further strip was added at the top after Rubens’ death.

All these adjustments and extensions added to the complexity of the restoration: differing mixtures of paint, wood pulling in different directions and faded blue and red pigments. All beneath thick layers of yellowed and cracked varnish. Despite previous restorations, by 2012 the painting was in urgent need of a facelift. Restoration was completed in 2014, since when the intimate scene once more looks the way Rubens intended.

2. Epitaph of Nicolaas Rockox and His Wife Adriana Perez 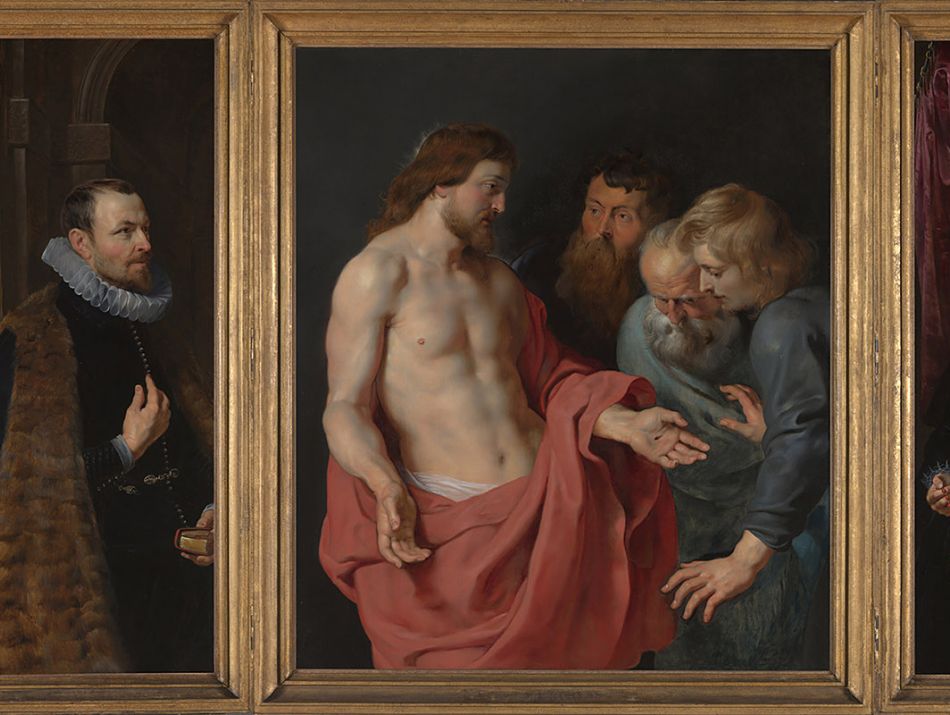 Rich people in the 17th century could have burial chapels installed for themselves in large churches. One of them was Nicolaas Rockox, mayor of Antwerp. A highly personal and emotionally charged painting was commissioned to adorn his chapel in the Franciscan church, later demolished. The ideal man to paint a memorial triptych for Rockox and his Spanish wife was obviously his close friend Rubens. The couple chose an episode from the Bible as the painting’s central theme, with the disciple Thomas struggling to believe that Jesus was able to rise from the dead.

The beautifully muscled figure of Christ made this a particularly enjoyable assignment for Eva van Zuien, who spent two years restoring the work. Even though she had to plough her way through layers of varnish and earlier restorations. Fortunately, the original paint surface that lay beneath it all turned out to be in remarkably good condition. Rubens’ intimate friendship with Rockox is now more obvious than ever in the lifelike portrait he painted for one of the side panels. 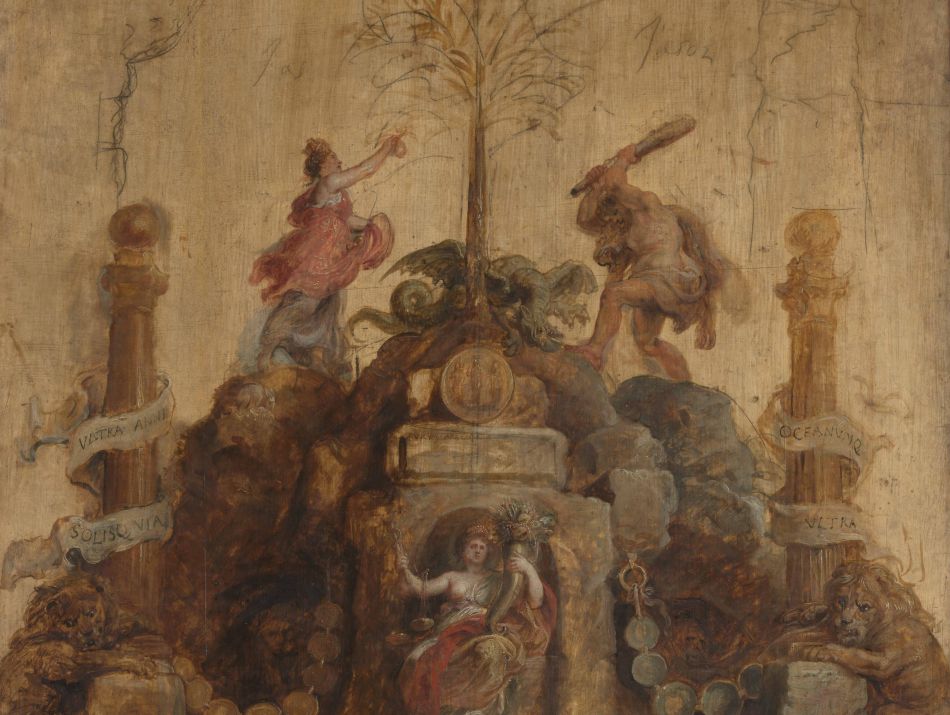 The Rubens collection at the KMSKA does not only include religious scenes. Nor was Rubens only a painter. When the king of Spain placed the Cardinal Infante Ferdinand in charge of the Spanish Netherlands, the new governor toured the region to introduce himself to his subjects. Antwerp’s turn to stage a ceremonial reception came in 1635. The city was spruced up and richly decorated, including a temporary triumphal arch designed by Rubens. Money is the symbolic focus of the arch and its numerous mythological figures, as well as gold and silver mining at sites like the Peruvian mountain to which Rubens has given a prominent place. The Spanish empire depended heavily on such riches.

The riches of Rubens’ design also needed to be excavated, as it were, from beneath thick layers of varnish, interspersed with dirt and overpaints. The original colours had been lost, as well as the drawn lines. In certain places, the paint had lifted from the support. Jill and Ellen Keppens have removed the caked-on varnish and fixed the lifted paint. In the process, they uncovered Rubens’ fingerprints in the paint and the fine details he was able to capture in a few deft strokes. A salamander climbing the arch, for instance. And a line drawing of a lion’s head. 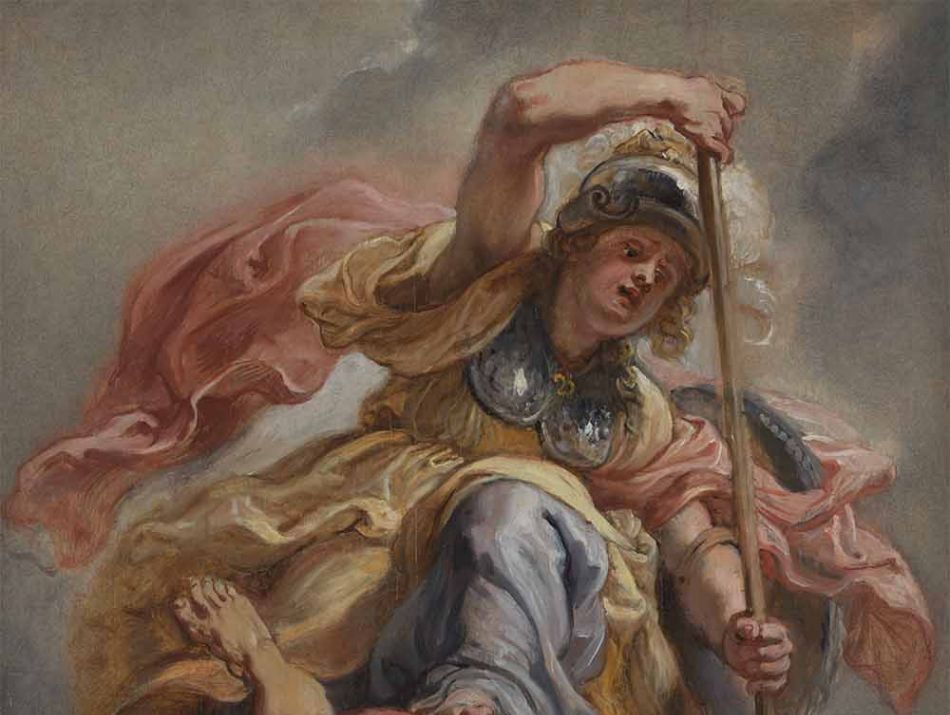 In 1621, King Charles I of England asked Rubens to fill a ceiling of the planned Banqueting House in London with nine paintings. The KMSKA owns one of the preparatory oil sketches for those works. It shows Minerva, the Roman goddess of wisdom, vanquishing Discord. The wooden panel on which Rubens painted the sketch was removed in the 19th century and the painting remounted on canvas. The canvas was replaced in turn in the 1950s with chipboard. In both cases, paper was used as a temporary support for the paint, as confirmed by the recent research accompanying the restoration.

The figures survived these hazardous interventions in good shape – the sky around them less so. The conservator Titania Hess retouched the sky wherever possible. Combined with the removal of yet more yellowed varnish and unsightly overpaints, we can once again appreciate the swirling composition Rubens had in mind.

5. Epitaph of Jan Michielsen and His Wife Maria Maes 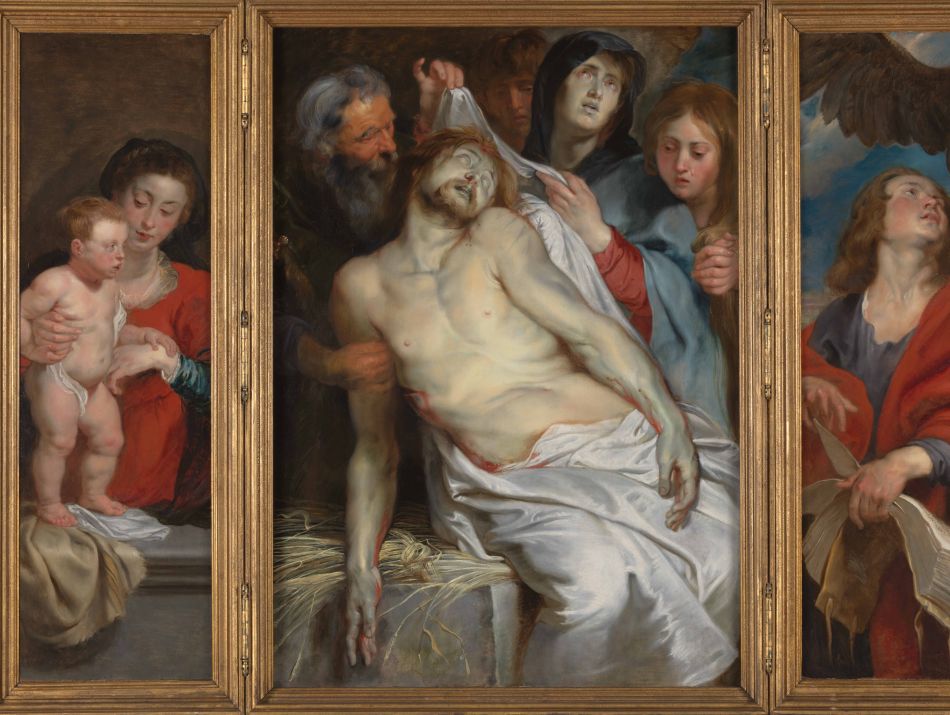 Like Nicolaas Rockox, Jan Michielsen could afford his own funerary monument, complete with a painting by Rubens and in Antwerp Cathedral to boot. The central panel of the triptych demonstrates exactly what the Baroque was all about: showing and eliciting emotion. Christ’s pale body is surrounded by his close-knit band of grief-stricken companions. Not least his mother.

Sadly, all this emotion was buried once again beneath layers of yellowed varnish. But the conservators Eva van Zuien and Jill and Ellen Keppens found more than just tears when they cleared away that sludge. Intense colours shine out and the artist’s own ongoing adjustments have been revealed. We know from a variety of scans that Rubens modified his composition in both the central panel and the wings. Christ, for instance, was initially covered up more – a fact that offers us an insight into the painting process. Differences of touch, meanwhile, suggest that several assistants probably worked on the triptych. 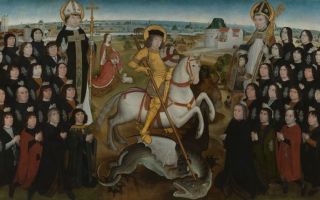 Since 2016 the museum can count on the support of the National Lottery for the restorations of the artworks. 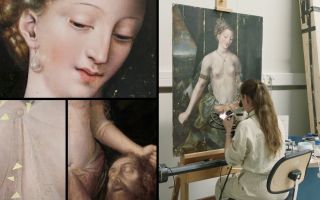